Last weekend, the 20-21st of June, our club took part in two events.

The first was a seminar with Sensei Kris Wilder on the Saturday that covered the kata Sanchin from Goju Ryu Karate.  This event was organised by Sensei Matt Jardine from Jardine Karate in Kingston and I would like to express my thanks to him for inviting us and for making us feel so at home.

To be honest I had expected this session to involve a lot of kata repetition with little or no explanation, as is quite common on seminars.   However, I was pleasantly surprised and really happy to find that Sensei Kris is a very practical person and open to questions and conversation.  I found the way he taught truly inspiring.  He delivered clear instructions with humour coupled with an impressive level of anatomical knowledge, which made it very easy to understand his points.  He also provided visual support to his descriptions using excellent drawings that he sketched up on a whiteboard.

For me, the most interesting part of this seminar was that despite a distance of over 8,000 km between Seattle and Krakow I have now encountered another teacher (in addition to my Sensei) that uses very similar principles in applying techniques.  Maybe because of this I felt at home at this seminar as I was already familiar with Sensei Kris’ approach.  I definitely plan to borrow some of his descriptions when explaining movements to my students!

Apart from being a great teacher Sensei Kris is a very approachable person so I felt comfortable speaking with him freely about any subject, starting with Karate through to communism in Poland and ending up with gun problems currently experienced in the USA. 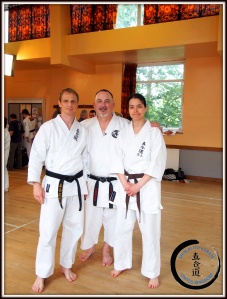 If you have the chance to attend a seminar with Sensei Kris Wilder I would highly encourage you to do so, it is well worth it!

On the Sunday I represented our club at Reading on a Yawara Jutsu seminar with Hanshi Terry Wingrove.  I had really been looking forward to this event as a lot of my close friends from Poland have trained under Hanshi Terry for many years.  I had actually planned to attend seminars with Hanshi Terry for some time, but something had always come up that had prevented me from being able to join.  So when I heard that Hanshi Terry would be at a seminar that is so close to me I knew that I had to attend.  This seminar was organised by Sensei Rakesh Chenchery from the Kensho Dojo and I would like to thank him for the very warm welcome. 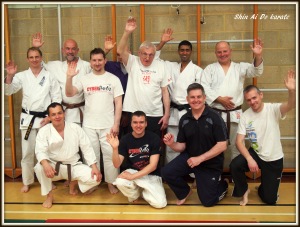 This seminar was very interesting with the vast knowledge of Hanshi Terry being somewhat overwhelming – the ways in which this man can cause pain is just unbelievable!  I had been introduced to Jutsu before by my friends so I naively thought that I knew what to expect.  Well it turns out that I was definitely wrong and there was a significant difference between techniques applied on me by my friends and those applied by Hanshi Terry.  The latter is a whole new level of pain.  I found the anatomical aspects most interesting in terms of how the body responds to overlapping pain and how it is unable to pay attention to anything else other than trying to ease the pain.  Some of the concepts of Yawara are similar to what I have experienced before, others are quite alien.

Having attended this seminar I am hoping to go to further seminars that will be run regularly by Hanshi Terry, which will give me a chance to broaden my knowledge and experience in martial arts.

In a similar way to Sensei Kris, Hanshi Terry is very open and approachable and both teachers encourage you to ask questions and think about what you are doing.  I do love this approach that is more involved than the simple “monkey see, monkey do”.

Having written a previous article about the lack of Modesty, Kindness and Honour it is great that life proves me wrong and gives me the opportunity to meet brilliant teachers, for which I am very grateful.

If you ever have the chance to attend seminars with Hanshi Terry or Sensei Kris just go and do it – you will not regret it!

This site uses Akismet to reduce spam. Learn how your comment data is processed.